Terram - Geosynthetics you can trust

TERRAM® geosynthetics possess hydraulic and filtration properties, allowing them to be used highly effectively in place of traditional filter layers, to counter progressive erosion problems on a global scale caused by issues such as Climate Change. Typically, a single layer of geotextile fabric can replace a succession of stone filter layers.

Erosion protection can be provided to a certain level by natural vegetation. However, in areas such as coastal, rivers, lakes, reservoirs, drainage ditches, flood bunds and overspill ponds where the area is prone to wave run-up, intermittent high velocity flows or with steep slopes, this is often inadequate.
The dynamic erosive force of reverse wave flow actions experienced in areas such as river and canal banks, undermines bank stability and affects channel flow and navigability.
Terram Geotexitles are highly effectively when used in place of traditional filter layers due to their hydraulic and filtration properties.
A single layer of Terram geotextile fabric can typically replace a succession of stone filter layers and, with a single bedding layer of stone laid on the geotextile, can carry the rock armour that resists erosion caused by variable hydraulic forces.
Design Considerations 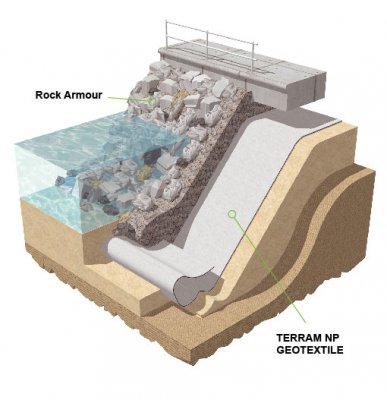 TERRAM Geocell is a blanket of three dimensional cell structures applied to a slope surface to greatly improve resistance to erosive forces such as rainwater run-off on steep or unstable slopes, or slopes exposed to severe hydraulic or mechanical stresses, and which often eliminates complicated and expensive alternative construction techniques.
The cells can be filled with a variety of infill materials depending on the application, such as topsoil, aggregates (from sands and gravels to larger stones and cobbles) and concrete of various strengths and surface finishes.
Design Considerations 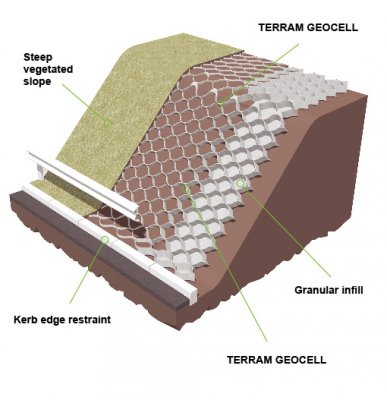